Tribute to Nadia Theodorie: A life in the service of women in Palestine

The Sunbula family mourns the passing of Nadia Theodorie, our founding board member, on October 24th in Bethlehem.  Through her lifelong involvement with community organizations, Nadia touched the lives of countless women throughout Palestine, like those artisans who earn their livelihood through Sunbula that she helped to establish.

Nadia was born on September 5, 1934 in Jerusalem to a Palestinian Christian family, and was raised and educated in the city until they fled the 1948 Nakba to Bethlehem for what they thought a temporary refuge.  The key to their home – which still stands in the garden of St. Andrew’s Scottish Memorial Church and Guesthouse in Jerusalem – was entrusted to the Greek Orthodox Patriarch with the expectation of return.  Yet, under the new political reality of Palestine the family eventually settled into Bethlehem. 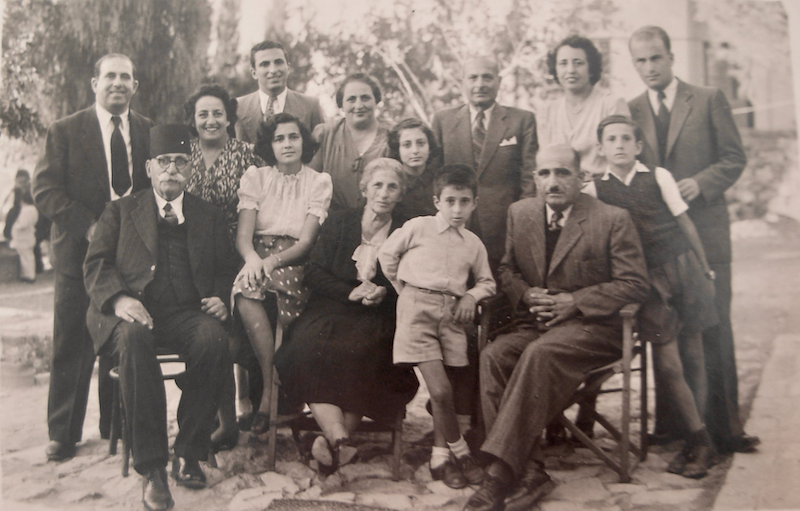 Nadia, standing in the back row in the middle, at her grandparents' 50th wedding jubilee in the garden of their home in Rehavia, Jerusalem, 1947

In 1954, Nadia enrolled at the Teacher’s College, which had just been established the year before, in Ramallah.  Its opening - the only college of education in all of Jordan and public boarding school for female students - signaled a new era for women to become educated.  Nadia graduated in 1956 and taught English to the 5th to 9th graders at the Bethlehem Secondary Girls’ School, located right behind the Church of Nativity.

In 1964, Nadia left teaching for the YWCA of Palestine, and headed the vocational and educational department over the next 38 years.  Nadia supervised the business, secretarial, and home economics courses and all the extracurricular programs like culinary and language courses.  She also organized lectures and recreational activities such as dabkeh (Palestinian folkloric dance), trips for students and members, local choirs, summer camps, and special events.  Nadia was also in charge of the internship placement of graduates at companies and organizations, and promoted the handicrafts produced at the YWCA centers in local and international markets. 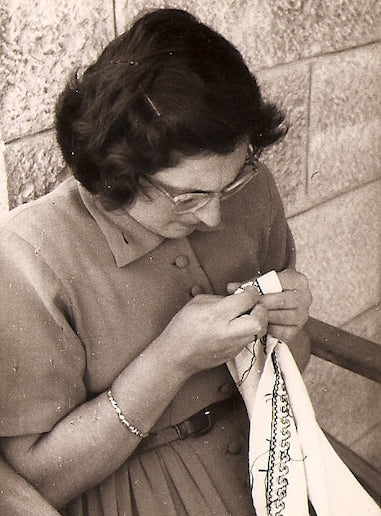 It was during her time at the YWCA that Nadia met Carol Morton, the wife of the late Rev. Colin Morton of St. Andrew’s Church, and got involved in starting a new income-generation project.

“Nadia was one of a group of women who were instrumental in those early days, encouraging me in the project which was something quite new in Palestinian culture.  Fair trade was unknown except for the Holy Land Handicraft Cooperative Society in Beit Sahour and their olive wood products.

Bringing together local groups with different political persuasions to a bazaar at St. Andrew’s in the fall of 1988 during the First Intifada (Palestinian uprising) required good advice and delicacy to gain trust.  How could an American, living in a Church of Scotland guest house on the Green Line in Jerusalem, ever understand their culture and the role that embroidery played in it?

Starting an income generating project was met with suspicion by some, but never by Nadia, just the opposite: she saw the potential and nursed it along.  She and other Palestinian women gave us the courage to pursue the project which eventually became Sunbula, holding my hand on the way, volunteering as members of a charity’s Board, enveloping me with generous love and wisdom as they welcomed me into their homes and, dare I say it, hearts.  These women have never left mine, especially Sitt (lady) Nadia.”

Their project was initially called 'Craftaid’, and operated out of a small corner at St. Andrew’s Guesthouse for five years before moving into the spacious library room in the front of the building.  It grew into the officially-registered nonprofit charity 'Sunbula’ in 1996 with Carol as the founding director.  Sunbula became a certified fair trade organization with the International Federation of Alternative Trade (known today as the World Fair Trade Organization) in 2000, opened its second shop in the East Jerusalem neighborhood of Sheikh Jarrah in 2010, and supports 25 artisan groups from across Palestine today.

Nadia retired from the YWCA in 2002.  She remained very active as a volunteer and served on the board of several organizations in addition to Sunbula, such as the YWCA Bethlehem and the Four Homes of Mercy.  She lived with her brother Teddy in Bethlehem, in a home resplendent of Palestinian embroidery and art work.  Their home was also the only connection to Palestine for many of their extended family members in the diaspora, and the hospitable siblings were the carriers of the family history and memory.  After Teddy’s passing in 2018 and even in her declining health over the last few years Nadia lived fiercely independently, always with her signature wit, intelligence, bravery, and warmth.

Nadia carried with her a sense of history and strong love for Palestine.  She was committed to Sunbula’s mission to safeguard Palestine’s cultural heritage and tended to our organizational matters until the week before her passing.

Thank you, Nadia, for all that you’ve done for Sunbula and the community.  May your beautiful soul rest in peace.